The word "''football'', when used in reference to a specific game can mean any one of those described above. Because of this, much friendly controversy has occurred over the term ''football'', primarily because it is used in different ways in different parts of the English-speaking world. Most often, the word "football" is used to refer to the code of football that is considered dominant within a particular region. So, effectively, what the word "football" means usually depends on where one says it. 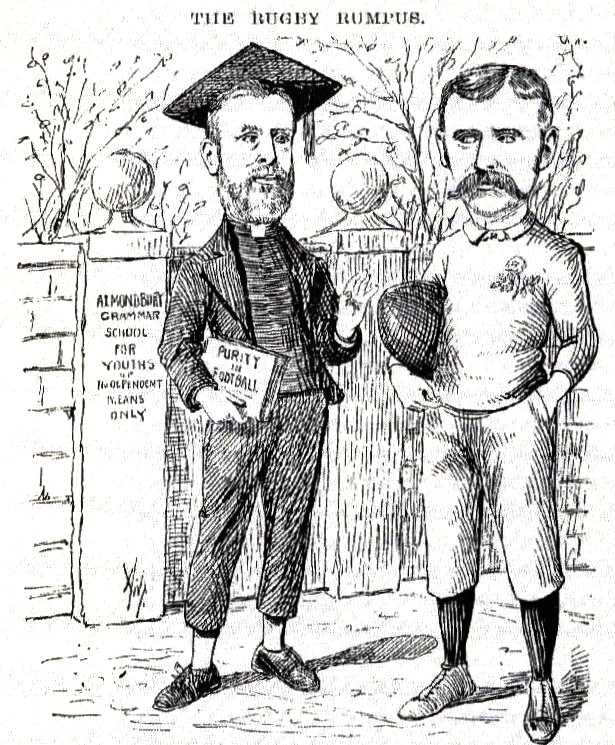 The caricatures are of Rev. Frank Marshall, an arch-opponent of broken-time payments, and James Miller, a long-time opponent of Marshall. The caption underneath reads:

Marshall: "Oh, fie, go away naughty boy, I don’t play with boys who can’t afford to take a holiday for football any day they like!"
Miller: "Yes, that’s just you to a T; you’d make it so that no lad whose father wasn’t a millionaire could play at all in a really good team. For my part I see no reason why the men who make the money shouldn’t have a share in the spending of it."

The expanse of the British Empire allowed these rules of football to spread to areas of British influence outside the directly controlled Empire. By the end of the nineteenth century, distinct regional codes were already developing: Gaelic football, for example, deliberately incorporated the rules of local traditional football games in order to maintain their heritage.

In 1888, The Football League was founded in England, becoming the first of many professional football competitions. During the twentieth century, several of the various kinds of football grew to become some of the most popular team sports in the world.

Rugby]] (near the school), exhibited both round and oval-shaped balls at the Great Exhibition in London. Richard Lindon's wife is said to have died of lung disease caused by blowing up pig's bladders. Lindon also won medals for the invention of the "Rubber inflatable Bladder" and the "Brass Hand Pump - wikimedia

The iconic ball with a regular pattern of hexagons and pentagons (see truncated icosahedron) did not become popular until the 1960s, and was first used in the World Cup in 1970 (1970 FIFA World Cup).